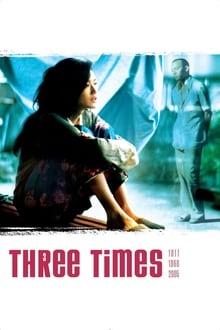 There are three stories of women and men: in “A Time for Love” set in 1966, a soldier searches for a young woman he met one afternoon playing pool; “A Time for Freedom,” set in a bordello in 1911, revolves around a singer’s longing to escape her surroundings; in “A Time for Youth” set in 2005 Taipei, a triangle in which a singer has an affair with a photographer while her partner suffers is dramatized. In the first two stories, letters are crucial to the outcome; in the third, it’s cell-phone calls, text messages, and a computer file. Over the years between the tales, as sexual intimacy becomes more likely and words more free, communication recedes.