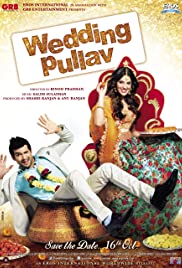 Wedding Pullav shows the story of two best friends Adi (Diganth) and Anushka (Anushka Ranjan) who are in love but they themselves are unaware of it. When Anushka is invited to attend the wedding of Diganth this love confusion further increases. On one hand Diganth is jealous with Anushkas boyfriend while on other side Anushka do not like Diganth to marry another girl whom she initially praises. The story then moves to a stage where they know their feelings but not sure what to do next.