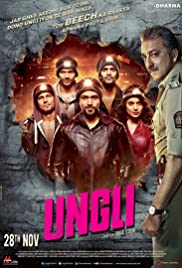 Four friends Kalim (Angad Bedi), Gautam (Neil Bhoopalam), Maya (Kangana Ranaut) and Abhay (Randeep Hooda) form a gang called the “Ungli” gang which fights against corruption prevailing in society. Their job is to target corrupt people and punish them in a unique manner. Due to increased popularity and their high profile targets, they are sought by Mumbai police department as “wanted”. Their case is the responsibility of ACP Ashok Kale (Sanjay Dutt) and inspector Nikhil Abhyankar (Emraan Hashmi). Nikhil disguises himself as a college student and joins the ungli gang with the hidden motive of arresting them. But soon, his heart changes after learning the story of why ungli gang was formed. Meanwhile, Kaale is compelled to seek help from the gang when Nikhil helps him expose the gang’s greatest target, B.R. Dayal (Mahesh Manjrekar) and his son Anshuman.