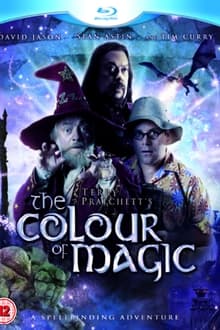 Naïve tourist Twoflower (Astin) is on holiday in Ankh-Morpork when a terrible fire breaks out, forcing him to flee from the city alongside an incompetent wizard named Rincewind (Jason). Now, as the clueless pair set out on a magical journey across the disc, neither realizes that they are merely pawns in an elaborate board game being played by the gods. After encountering a pair of barbarians on their way out of Morpork, Twoflower and Rincewind take a trip to an inverted mountain housing dragons that only exist in imagination, survive a fall off the edge of the disc during a perilous visit to the country Krull, and attempt to beat Rincewind’s former classmate Trymon (Curry) to a collection of eight spells that could save Discworld from total destruction.

Watch The Color of Magic