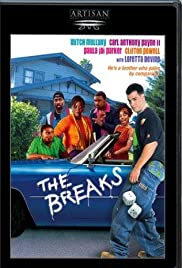 Derrick, a racially-confused Irishman raised in the hood by a black family is having the worst day ever. Determined to prove to his fed-up mother and would-be girlfriend that he’s not a screw-up, he sets out to do one thing right (get some milk) and even that proves to be a challenge! Hilarious encounters with racist red-neck cops, local gangsters and ‘flamboyant’ pawn shop owners ensue, and along the way Derek shows that he can actually do things for others and maybe even get his own life together.