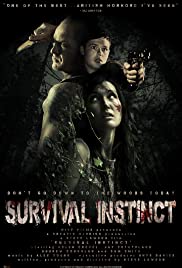 After five years in prison for a violent assault, everyone knows not to mess with Weaver – especially his step-son Rex. But when an innocent couple accidentally crossed paths with Weaver during an illegal hunting expedition, all hell breaks loose and Weaver’s rage is unleashed again – and this time he’s armed and dangerous. A tense cat-and-mouse chase through the wilderness ensures, leading to a deadly confrontation between Weaver and Rex and their human prey – a young woman with a strong survival instinct.