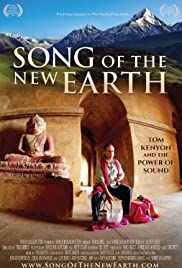 Seattle filmmaker Ward Serrill (The Heart of the Game, Miramax) follows one man’s quest to integrate modern science and ancient mysticism through sound. It features the extraordinary life and work of country singer turned brain scientist and shaman of sound, Tom Kenyon, as he journeys from his homeland of Orcas island to the stage on Broadway, giant caves in the south of France, the golden-chandeliered symphony halls of Vienna and finally to the snowy peaks of Tibet.

Watch Song of the New Earth