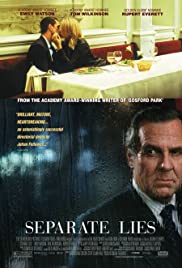 A cyclist is killed, swiped by a Range Rover in a village lane. James and Anne Manning become involved because the victim is the husband of their cleaner, Maggie. James, a solicitor in the city, soon comes to suspect William Bule, a millionaire playboy who has moved back to the village. William, pressed by James, confesses to the hit and run. But the confession is clouded by Anne’s admission of her affair with William.