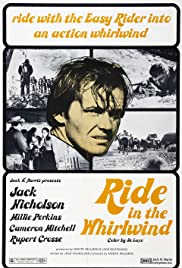 Three cowhands, between jobs, have the bad dumb luck to pitch night camp in the same valley as a cabin full of guys who just robbed a stagecoach and killed the guard. Come morning, a posse arrives, forms up along the ridge, and takes for granted that everyone down below is guilty–fit for either shooting to bits or hanging from a tree, whichever comes first. Precisely half of Ride in the Whirlwind’s 82 minutes is devoted to tapping the matter-of-fact, absurdist horror of that situation. In the remaining half, the two surviving cowpokes (Jack Nicholson and Cameron Mitchell) seek shelter at a farmhouse where they reluctantly threaten the farmer, accept breakfast from his wife, flirt with his daughter (Millie Perkins), play some checkers, and hope to remain undetected till nightfall.

Watch Ride in the Whirlwind