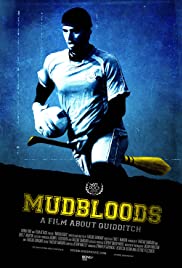 Transforming Harry Potter’s fictional competition into a physically demanding, real-life sport, quidditch has secured its place as one of the fastest growing collegiate club sports today. MUDBLOODS follows the resilient underdogs of the UCLA Quidditch team as they make their way to the Fifth Annual Quidditch World Cup in New York City. Through nail biting victories and losses, the dreamers, creators and athletes who make up this exceptional community come together to make this magical sport into something you could’ve never imagined, until now.