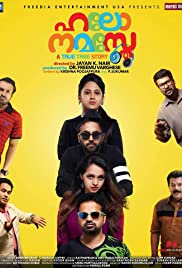 Madhav and Jerrin are close friends who are working as RJs at an FM station They are the heroes of the station hosting a morning programmer titled Hello Namaste, where they take up issues relevant to the city. Madhav is married to a baker named Priya. The actual story begins when Madhav, Priya and Abu attend the wedding reception of Jerrin’s ex-girlfriend Anna. There they realize that the groom is a good-for-nothing fellow and they entice Jerrin to elope with Anna. The two couples live together in a small house, and the going seems good initially. They late move into two identical luxury villas in a posh colony and become next door neighbors. The ladies begin to have minor issues and they pass them on to their men. Priya is very conscious of hygiene and her neighbor has a jack fruit tree that makes her porch messy. So, the jack fruit tree becomes the bone of contention between the two families, and the fight on whether it should stay or not continues till the end.