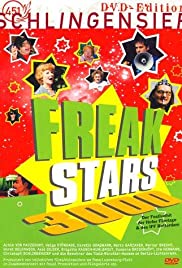 As stated in the opening titles and at the end Freakstars 3000 is supposed to be a commentary on the problems of the non-disabled people. The more I was shocked about how the disabled were depicted in this film the more I started to realize that in every non-disabled TV counterpart of this show (German TV shows like “Popstars” or “Friedmann” or the home shopping channels) its mentally “non-handicapped” participants are treated in a completely identical way: The total prostitution of the mind in front a huge TV audience at the expense of one’s most important gifts one should hang on to: dignity. On the other hand one could completely understand people who are furious about “exploiting” these handicapped persons. But that’s what Schlingensief’s works are all about: shock people and don’t care about those who cannot or will not try to get the message (if there is one).