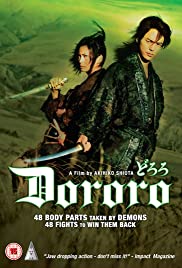 The hero, Hyakkimaru is a wandering “demon hunter” whose extra body parts — 48 to be exact — were grafted onto his head and trunk by a herb doctor who discovered him as an infant, in a process that echoes “Frankenstein” and “The Island of Dr. Moreau.” His warlord father gave the originals to 48 demons in exchange for power. When Hyakkimaru kills a demon, he wins back a body part. He is spotted in one of these battles, with a giant spider demon, by Dororo, a scrappy female thief who is fascinated by not only Hyakkimaru’s prowess with the sword blade poking out of his arm but the new leg he grows after dicing his opponent. Is he a man — or a monster? After hearing his story from an old minstrel, she decides to join him on his travels and find out for herself.