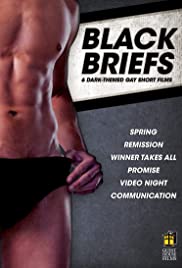 Six dark-themed gay short films, including: SPRING, A young man meets a stranger for S&M sex, an experience that will change his life forever. REMISSION, As a man awaits the results of a biopsy at his secluded cabin, his dread amplifies when he suspects that he may not be alone
WINNER TAKES ALL, The unapologetic manipulator Ryker engineers a fight between his two boyfriends … with Ryker himself as the ultimate prize.
PROMISE, Stu and Chris appear to be the perfect couple, but past indiscretions are revealed on the eve of their wedding, causing unforgivable actions that both will regret.
VIDEO NIGHT, What starts out as a fun night making videos goes terribly wrong when a group of friends discover something unexpected in the raw footage.
COMMUNICATION, The story of an Orthodox Jewish student who unexpectedly inherits the estate of his estranged mentor and discovers a painful truth about their relationship.