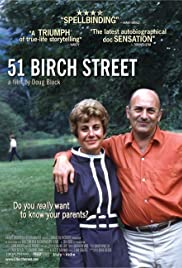 Documentary filmmaker Doug Block had every reason to believe his parents’ 54-year marriage was a good one. But when his mother dies unexpectedly and his father swiftly marries his former secretary, he discovers two parents who are far more complex and troubled than he ever imagined. 51 Birch Street is a riveting personal documentary that explores a universal human question: how much about your parents do you really want to know?